It has been many years since Carradale had a Harbour Day so nobody knew quite what to expect. In the end success was in the hands of the weather gods who thankfully smiled on us for most of the day. 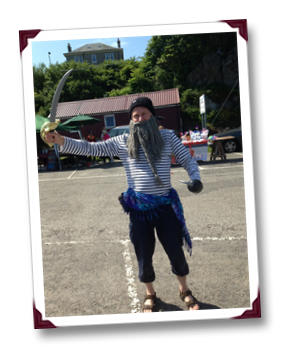 By midday we had all the stalls set up and people began to arrive, then more, and then more still. Burgers and cakes began to disappear into mouths, drinks were being consumed, tickets for the tombola were moving fast and the treasure hunt squares were filling up.

Young faces painted as wild animals appeared here and there and strange piratical types brandishing cutlasses loitered about, without anyone really paying much attention!

The sun shone down on us all, swelling the crowds as the day progressed. 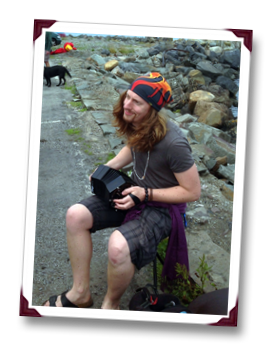 Another shipwrecked pirate played us a few jigs on his concertina to get us dancing then before we knew where we were the competition judging started. 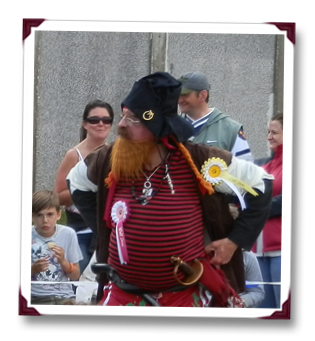 First it was the turn of the pirates and this scary character took first prize here, then went on to judge the dog show afterwards. (Many thanks John.)

By this time there were dogs everywhere, thankfully mostly well behaved, and soon the competitions got underway – Best dressed dog, Best trick, Wiggliest tail, Most appealing eyes – then finally the grand finale was the Musical Sit.

The musicians took their places in the centre of the parade ring and dogs, with their owners firmly in hand, walked around waiting for the command. Each time the music stopped the last dog to sit dropped out until only one dog and owner were left. First prize went to Star and his highly trained, but very proud, owner Dominic. Well done to you both!

Come the end of the day the food had largely been consumed and Una Semple had won the prize for finding the hidden treasure. We all enjoyed ourselves immensely. Thanks must go to all the helpers, to those who donated gifts and prizes, to the stallholders and to all those who entered into the spirit of the day. You are all too numerous to mention individually but thanks anyway.